Every November, our hearts and minds are there, at the Athens Polytechnic, at the heroic uprising of students, young people and the whole of Greece against the Junta, in November 1973.

The Polytechnic uprising (Politechneio, Πολυτεχνείο in greek) symbolises not only the heroic struggle but also the unity of all democrats.

The November struggles are the highest expression of the seven-year fight against the dictatorship, and one of the most important moments in the fight for freedom of the Greek people and especially Greek youth.

The ideals of freedom, independence, peace, love of life and mankind, remain alive and will stay current and unalterable, no matter how many years pass from that rising.

The Events of the Polytechnic Uprising

Despite the harsh repressive measures of the military Junta during the seven-year dictatorship of 1967-1973 in Greece – the imprisonments, displacements, mass trials in emergency courts-martial, torture, mock executions and murders – popular demonstrations against the regime continued throughout the dictatorship, with young people always playing a leading part.

Popular indignation against the Junta began to be forcefully expressed from early 1973, with the sit-ins at the Law School in Athens in February, the demonstration on 4 November on the occasion of the memorial service for George Papandreou, at which there were arrests, and the demonstration by 3,000 students the next day in support of those arrested. Demonstrations also continued at the universities.

The political upheaval which broke out in Athens lasted from 14 to 17 November 1973. The upheaval began with the sit-in at the Polytechnic by students, peaked with the pan-Athenian mobilisation against the regime, and concluded with military intervention.

The Polytechnic Uprising begins with the general meetings of the students’ unions on the morning of Wednesday 14 November, which result in the rejection of government measures concerning the planning of student elections. On the same afternoon, the students, who have gathered at the Polytechnic in the meantime, decide to occupy the building under the control of a Coordinating Committee. By the evening, the slogans have become clearly political.

The slogans shouted and painted on banners in the Polytechnic are no longer concerned with education alone but turn against the regime: “Papadopoulos, you fascist, take your washerwoman wife, take Despina and go, the people don’t want you”, “Bread, Education, Freedom”, “People break your chains”, “US Out” and “Down with the Junta”, “FREEDOM”, “Today Fascism dies”, “This’ll be another Thailand” (a reference to the student uprising in Thailand in July 1973, which had contributed to the fall of a forth-year military dictatorship in October of the same year).

The students gathered inside the Polytechnic set up an occupation committee. The doors are shut and the first meeting of the Coordinating Committee takes place at 8:30 that evening. The first manifestos were scattered in Patision Avenue, which is blocked by crowds of people. 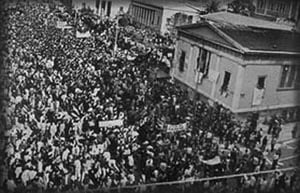 Thursday 15 November 1973. The sit-in draws the people of Athens, who start to flock to the Polytechnic. By 9:30 p.m. the sit-in is packed, while the crowds in the surrounding streets shout anti-American and anti-Junta slogans. The crowds remain there all night to express their support of the Polytechnic students.

Friday 16 November. The Polytechnic radio station starts broadcasting the message of the struggle to the whole of Athens, which is watching events with bated breath. “Polytechnic here! Polytechnic here! This is the Radio Station of the free fighting students, the free fighting Greeks. Down with the Junta, down with Papadopoulos, Americans out, down with fascism, the Junta will fall to the people. People of Greece, come out on the streets, come and stand by us, in order to see freedom. The struggle is a universal anti-dictatorial, anti-Junta struggle! Only you can fight in this struggle. Greece is governed by foreign interests! The dictator Papadopoulos is trying to hide behind a mask of democracy with the fake government of Markezinis and the fake elections it is proclaiming.”

At 9 a.m. the first barricades are raised and two mass demonstrations form in Panepistimiou and Stadiou Avenues. At midday a farmers’ committee from Megara, protesting against the expropriation of their land, visits the Coordinating Committee and the radio broadcasts: “The people of Megara promise to stand and fight at the side pf the students and workers… This is a common struggle… It is not just for the town of Megara or the Polytechnic… It is for Greece. For the people of Greece who want to determine their own lives. To walk on the path to progress. The basic requirement is the overthrow of the dictatorship and the restoration of democracy.”

The people gathered outside the Polytechnic singing the traditional Cretan revolutionary song “Pote Tha Kanei Xasteria” (When Will the Sky Be Clear Again).

By the afternoon thousands of demonstrators have gathered, including many workers. At 6 p.m. clashes between police and demonstrators begin, with many injuries. At 7 p.m. a mass march heads for the Polytechnic and the police choose this moment to strike. Police armoured cars appear and the first shots are fired. There are running fights all along Solonos, Kaningos, Vathi, Aristotelous and Alexandras Avenues and Amerikis Square.

At 9:30 the police declare a curfew in the centre of Athens until further notice. At 11 p.m. the radio station and loudspeakers ask people not to leave. The area around the Polytechnic is shrouded in choking teargas.

Saturday 17 November 1973. The first tanks appear shortly after midnight, while more and more dead and injured are taken to the makeshift hospital in the Polytechnic. By 1 a.m. the Polytechnic has been surrounded by tanks. The radio station and loudspeakers call, “Don’t be afraid of the tanks”, “Down with fascism”, “Soldiers, we are your brothers. Don’t become murderers”. At 1:30 the tanks set off with their headlamps on. The students cling to the gates, singing the national anthem and calling to the solders, “We are brothers”.

The army gives the people inside 20 minutes’ notice to get out, while a tank takes up position near the main gate. The Coordinating Committee tries to negotiate the students’ safe exit.

2:50 a.m. Saturday 17 November: The commanding officer waves the tank forward. The gates fall and the tank continues up to the steps of the “Averoff” building. It is followed by men of the security forces and the LOK Special Forces. Shots are fired. Some soldiers help the students escape, but plain-clothes policemen are waiting at the exits. By 3:20 there is no-one left in the Polytechnic…

The 17th of November 1973 was the turning-point of the 1967 dictatorship. Although the students did not actually overthrow the regime, the intense and persistent reaction, the new voice heard from the Polytechnic and the earlier Law School sit-in, shook the Junta to its rotten core.